Chaquis Maliq – Harmonies of Me

Sometimes you meet artists who stand out. Chaquis Maliq is one of those.  With a sound that is unique and unpretentious, she woos your soul like she’s singing you a lullaby.  But, she’s got that fire, that spark, that thing that you just can’t put your hand on and identify, but you know you want more.   Catch her now because she’s definitely on the way up.

How do you define yourself – musician, artist, singer – all of the above?

Well, all of the above and, producer, composer, and arranger. I don’t consider myself a “true” musician, being that I only play for myself.

Why did you get started with music?  Who inspired you to begin?

It seems like I had no choice but to fulfill my calling. I grew up around musicians, singers, and songwriters on both sides of my family. But it was all choir or Gospel quartet music. Performing always looked fun, but I was the quiet one in the family.

How long have you been doing what you do?

I have been playing the guitar since late Spring 2011. I did my first show in Dec. 2011 with a band. Took a hiatus until March 2012 and have been performing ever since then.

You play multiple instruments.  There was a process involved in that.  Please tell us what instruments do you play and what drew you to them and why you chose them or they chose you.

I first started out with the piano, plus I was the baddest tambourine player in the Baptist Church (He he he he). I was on and off with piano and taking lessons. I was interested in playing the music I made up, without trying to overwork my brain with reading music. I took an interest in the drums too. I simply learned by watching my older brother and older cousin, who had been playing since they were 3 & 5 years old. I also picked up playing the Djembe a few years ago. That was fun too.

That wonderful earthy voice of yours – where does it come from?

Aw, thanks! Funny, my 5 year old lil cousin asked, “Where did you get that voice from?” I responded by saying, “From God.” She says, “But How?”. I said, “It’s Magic!” I can come up with all kinds of answers, but I give all the credit to God/Universe.

Tell us about the process you went through to find your singing voice. 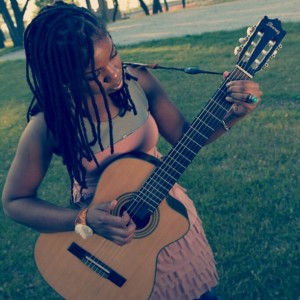 I could not sing as a child. I was just like any other untalented child yearning to sing, but would yell obnoxiously and off key to my favorite songs. I was even put in the children’s choir in church, but I would just stand there. Finally they switched me from the soprano row to alto and I began to sing, but the voice you know today was nowhere to be found.

Soon, I began to mimic all the singers on my favorite songs, but I still had no voice. I finally led a song in church and oh my, the most horrifying thing ever, but cute I guess. LOL.  So this carried on through middle school and high school, I got better by just singing the way people sang their songs.

Things started to change once I made my very first CD, The Demonstration Vol. I, where I was able to use all of my mimicking skills. Even my mother asked, “How did this happen overnight? Who, did you have come and sing your background?” So, to me that is proof that I could not sing, but no one ever said anything or nurtured my passion.

How long have you been writing songs and what inspires you to write?

Well, I made up songs as a kid all the time with my pianos, keyboards, karaoke machines; etc. (Ha ha ha! ) I started writing poetry in high school. I wrote my first contemporary Gospel song and performed it after I graduated. Once I got to the east coast, I tried turning my poems into songs. That was one of the hardest things to ever do. Finally a co-worker introduced me to an independent record label, where I became a ghostwriter. I was very uncomfortable with the label and how I was being treated, so I left. This happened multiple times before I would later put out The Demonstration Vol. I (2007)  and Veracity (2010).

I am inspired by almost everything you can think of. It could be a conversation, the thought of where I will be in 5 years, things that I have witnessed or experienced.

I am not a forceful writer. And I don’t suffer from writer’s block, because I only write when my guitar/music or my heart speaks to me. But that was a process I had to learn as well. I found the playing my guitar allowed songs to come so easy and naturally vs. music programming production and then writing to that.

I’m a full-time musician/artist and volunteer music teacher/mentor. A 9-5 would make this a hobby and leave me heartbroken.

Wow. I had to make a lot of changes. The most important change was getting rid of all dead weight and people who were draining me of myself. I had to get out all bad relationships. I was already running from playing the guitar for years. I finally made myself available to face humility and let go of stubbornness. But because I surrendered the hardships didn’t stop there. 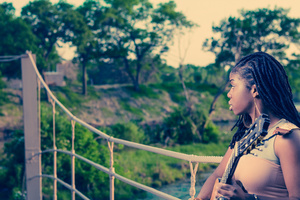 I still had to make mistakes in order to grow and open-up to receive blessings and be connected to the right people in my life. Once my Partner was sent to me, things began to change. I was encouraged to practice the guitar. Every song I sent via MMS was reviewed as a hit, even in its ruff stages. And yes those songs made it to Harmonies of Me. I finally had a genuine supporter (Domi V) that had no ulterior motives, but to help me. I took heed to every suggestion, from finding Soul Blogs, Getting Shows, guitar techniques, trying out management; etc. Whether it worked out or not  it was perfectly ok, because I was still supported. We were able to finalize Harmonies of Me after 2 years of me growing with my guitar (Mr. Maliq). It was a process, but we got the production and engineering completed as a team and that’s all that matters. Unconditional, God Sent Support, made it all possible.

I am hoping that music keeps me grounded so that I can always be equal to my audience. I don’t wish to have music put me in a place where I will feel that I am better or greater than the people that helped me get to where I am or will be. Being connected to the people leaves room for healing as well as growth for me and my audience.

On the other hand I do have goals. Just like most women, I want to be able to one day have a family. So, I intend to write music for other artists, score films, make music for children’s video games, and musicals. This way, I can be a great attentive future mother and future wife.