Home
film
Donald L. Vasicek – Films that Educate and Inspire
Tweet Pin It
Award-winning Writer/Filmmaker Donald L. Vasicek lived in Colorado and had never heard about the Sand Creek Massacre.  When he did come to learn about what happened in his home state, he decided that everyone needed to know what happened there.  To create awareness, he began documenting the Sand Creek Massacre. The Centennial, Colorado filmmaker/writer worked for numerous years, using his own money to produce the feature documentary film. 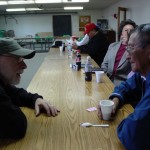 “On November 29, 1864, 700 soldiers of the  Colorado 1st and 3rd Cavalries slaughtered, mutilated, raped, and murdered over 400 (Southern Cheyenne Chief Laird Cometsevah told Filmmaker Donald L. Vasicek that over 400 hundred Cheyenne and Arapaho people were murdered at Sand Creek.  He based it on his oral history that was passed down through his family from his great-great grandfather, who survived the Sand Creek Massacre) Cheyenne and Arapaho children, women, elders, and disabled.  Originally this act was called “The Battle of Sand Creek.”  After a U. S. Congressional Committee interviewed witnesses to the tragedy, the name was changed to “The Sand Creek Massacre.”

According to certain educators, historians, etc., the Sand Creek Massacre was predicated on European immigrants migrated to Cheyenne and Arapaho land, exacerbated by mis-communication, corrupt Indian agents, fear, Territorial Governor John Evans’ political ambitions, and Colonel John Chivington’s desire to be elected to the United States Congress and his hate for the Indian people.

“We’ve used a passive approach to the telling of the brutality at Sand Creek for the purpose of showing the ignorance of utilizing killing as a means to solve problems. Violence always leaves an impact, but the graphicness of the murders, the rapes, the mutilations, even after people were dead, leaves a remarkable imprint on students, parents, and educators. They see an historic reality that motivates them to do more to circumvent violence in the present as a means to solve problems. And that includes fourth graders who viewed the film in an elementary school in Centennial, Colorado who shared their thoughts with me after the screening.” – Don Vasicek

“Just watched your film on Maxmouth.com. Speechless! You really did allow their voices to be the story.  A good film, as you well know, is one that creates powerful emotions and Sand Creek did just that.  I thought the list of names of the Cheyenne and Arapaho killed was the highlight. Seeing their names  scrolling before us gives them life and substance—-something history never did. Thanks so much for this important film.”