Gary Ramsey – Music from the Mountains of NC

In a small North Carolina mountain town called Kings Mountain lives a songwriter and musician who spends every waking moment either listening to or writing music and songs.

Gary Ramsey was born August 5th 1962 to a middle class working family, the oldest of seven children…Gary started writing music after he learned how to play guitar at age 13 and has since went on to write over 200 tunes alone and in collaboration with other artists and musicians.
At 18, he decided to go out and see the world and headed to Los Angeles where he honed his writing and playing skills.  He headed back to North Carolina by hitchhiking across the country..seeing and experiencing as much as he could before returning to his hometown.

He joined several local cover bands in the area, but his heart yearned to put out his original music.  He and fellow musicians Chris Short and Scott Norwood formed a band called Machine that took the area by storm.  The later addition of Harold Willis on guitar sealed the deal and they began touring and playing nothing but original hard rock music.  Gary was finally in his element. But, as some bands do, Machine dissolved over “petty bickering. ” Gary secluded himself for about two years and wrote song after song until he was ready to form a band of his own liking.  He found Dennis Horne and Lonnie Burgess.  They formed the band 13. Gary called on his old Machine band mate and drummer, Scott Norwood to complete the band.  They hit the road wide open – playing anywhere and everywhere.  Sadly, Lonnie Burgess passed away from an enlarged heart in August 2008.  The band was devastated but chose to carry on in his honor. Gary began playing bass along with and doing vocals continues writing all the music and lyrics.  Also as the band manager, he does all he can do to promote the band.

Gary still collaberates with various artists from around the world and has recently been signed on to a side project with guitarist Paul Underwood of Exitwound and Sheldon Scrivner, both out of Montana to do the lyrics, bass and vocals on the New Exitwound Project. 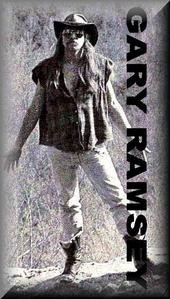 TIC: You seem to be one of those people was born with music in them? Is that true? How did you get started with music?
GR: It’s really something I can’t readily explain…I mean, being born with it might be true…but when I was younger everyone thought I was going to grow up to become an artist using paints and pencils..LOL. I used to let drawing and painting be my outlet more than anything I knew of…then one day I heard and saw the BEATLES, and all the girls were chasing after them cuz they played music, and I remember thinking, “Now,thats something I could get used too…ha! Me, my brother and two of my cousins would sit on our back porch and pretend to be the BEATLES when I was around 11 or 12…already I was letting my hair grow out past my shoulders, and we would get all the little neighborhood girls to chase us around the yard…just like we were real rock stars…ahhhh..if I only knew then what I know now…but around the age of 13 I saw my grandfather playing his guitar with a couple of my uncles and it just struck something in me…I cant explain it..I just knew I wanted to play a guitar, so I started picking up a chord here and there and practiced practiced practiced…soon,I was actually playing and writing my own tunes…it was uncanny the way the lyrics would just flow out of me. I could hear the music in my head and I would find the notes on the guitar to match up with what I was hearing and feeling internally and well, there ya go…
TIC: You write such wonderful stories through your songs. What do you base your lyrics on? Is there one or more things that inspire you when you are writing?
GR: Most of my songs are based on real life experiences and the raw emotions I felt at the time. A lot of my tunes deal with heart-aches and betrayal…but not all of them…I’m generally a happy person…I always have a smile on my face! My lyrics sometimes have a double meaning, by that I mean, I try to write in a way that when an individual is listening to the song, I want the words to mirror something in their hearts and lives so there is an instant connection for them and they feel the meaning as well as hear the song. And then other times I disquise the meanings by using double-entendre’ and placing certain key words in at just the right spot for emphasis.
My ballads are almost always real love songs…always. If you want to write a genuine love song, then you have to reach deep into your self and find that place in your heart that you are willing to

share.
TIC: You’ve traveled some in your life, or you’ve lived in different areas and have seen a lot. How do the things that you’ve seen and experienced in other places translate through your music?
GR: Oh wow…let me see…I have traveled a great deal…and I think in doing so, it allowed me to broaden my vision and my horizons greatly.
I was raised in a small, NC town where the main style of music was bluegrass or country…and having my rock n roll heart automatically made me stand out from the rest. So, I believe by getting out into the world and seeing and hearing all the different genres out there firsthand (and I was on a lot of roads alone, just me and my guitar, walking and looking) I picked up a lot from various places and cultures…I learned to play blues like it was supposed to be played…I’ll never forget what this one old man said to me,”To play the blues ….you gotta have the blues. “That stuck with me, cuz it meant to me whatever style or genre you play, if you dont feel it or live it, then you can’t give your all to it.
TIC: Who have been some of the most inspiring people to you not just musically, but in your life as a whole and why are they sources of inspiration?
GR:  My mom of course, she raised 7 kids by herself, and never once left any of us out…she worked her fingers to the bone making sure we had a roof over our heads and food in us. I got my sense of humor from my father, he was always telling jokes.
The first person to ever show me a chord on a guitar was a friend named Danny Joe Bridges, one of the best guitarist around here at the time, and he was amazed at how fast I learned and picked up on things.
As far as other artists go..man – there are so many great influences in my work, from Willy Nelson to Black Label Society and Pantera…LOL…and I have been fortunate enough to have been able to meet a lot of great artist thru the internet via myspace.com and jamwave.com (where I met you guys!). I have been blessed to be able to do some fantastic collabeartions with such great musicians like Sheldon Scrivner of Missoula, Montana and Pekka Lode Loikkanen of Savo, Finland(two awesome writers and musicians in their own right!) and a beutiful young lady put a female vocal point of view on a couple of my tunes and her name is Dawn Alberts of Massachusetts. I also wrote some country songs that I collabbed on wit Bill Sterling and John Davis, both from jamwave.com. You can hear these collaberations with these artists on my personal myspace page at www.myspace.com/ramseyskage and at www.jamwave.com/kmcc .
All in all,I just love to write and perform. If someone sends me a music track and it catches me right out of the gate and sparks my creative thought process, well, I let the songs speak for themselves. 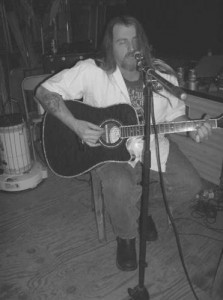 TIC: In your opinion, how does music serve people? What is its place in society?

GR: I hope that when someone listens to my music, they find something that matches where they are in their life and they can use that song to express their own feelings…like a soundtrack to their life. If someone can listen to my music and feel what I am saying and feel it inside themselves, then I am happy with that. I dont get very political, I just write what I know most…life, love, the road and loneliness, heartaches, love lost, love found…etc…

TIC: What is your goal with music? Do you want anything from all of your talent and gifts?

GR: My goal is really simple…I just want to play…that’s it…if I did it for the money, I would have gave up and quit years ago…but no, the music is as much a part of me as I am of it…it’s what I do…and from a lot of positive feedback that I get, I must be doing something right! LOL!
I want as many people out there to hear and enjoy my music as much as I enjoy giving it. It would be easier to quit smoking than it would to quit jammin’. I love being on the stage,whether its an actual stage at a venue or somebody’s back porch or just sitting around a campfire…if I’m there..I have a guitar with me and I’m playing and singing…it’s what I do.

11 responses to “Gary Ramsey – Music from the Mountains of NC”