Hanging Out With The Porch Authority

Playing in the genre of acoustic retro-rock porch music, The Porch Authority is comprised of veteran players who have found that their playing style complements each other very well.  They are:  Jonathan “Tucker” Deese – Guitar, Vocals, Dave “The Dave” Massengale – Bass, Guitar, Vocals and Doug “Doug” Holmes – Keyboards, Vocals While doing cover tunes in their own unique style, they also perform many original songs that can be driving, whimsical, always lyrical, and just flat-out entertaining. _______________________
Tucker, The Porch Authority does what they describe as “acoustic retro-rock porch music.”   Could you tell us a little more about what that is?  —  what do you guys consider to be porch music?__
If you have ever been to a party at someones house and there are a couple of musicians with instruments, they tend to gravitate to a space and jam, either around the campfire or on the porch.  They start playing songs and while they may not remember exactly how it goes, they simplify and represent the spirit of the tune, each adding a little bit and making it fun.  The point isn’t to try and sound like the original, but just to entertain, even it if is only ourselves.  Dave and I both play acoustic guitars and that changes the dynamics to more of a “porch” sound as opposed to having screaming electrics driving the sound.  It’s more friendly, if you will.
______________
Thus the derivation of the name “The Porch Authority.”  It’s cool.  Tell us about how you came up with the name. That was actually Doug’s idea.  When we first started playing together, we were jamming with a fantastic drummer named Todd Sarday and went by the name of “The DT’s”.  Had a dual meaning, our initials (Dave, Doug, Tucker and Todd) as well as a medical condition, but when Todd couldn’t commit to the project due to life issues, Doug put forward The Porch Authority and we realized it was very appropriate and a great play on words.______________

You guys describe yourselves as veteran players.  What other things have you and the other guys in the band done in terms of musical projects? Oh, wow.  That is a question with a long answer.  I have been playing basically most of my life both bass and guitar.  I can’t even count the number of bands I have been in.  I write on my guitar but played bass for a lot of years with a lot of great musicians.  Dave started out on guitar but switched to bass when he was in college playing blues then played Irish Folk on guitar for a living for a while.  Doug played keyboards in LA and Atlanta with several high profile bands but had stopped playing for a long time.  If you combined the time we have been playing individually, one of us would be dead by now, lol!____________
Of all of the projects that you’ve done personally, what was the most satisfying and why?  (And if it’s not The Porch Authority, what was it and why aren’t you doing it now?)
No question that this is it.  We bring out the best in each other and even with all our experience this band has taught us more and made all of us better musicians.  The excitement we get from arranging a new song, even if it is a cover, is just amazing.  I’ve never been with a group that just gets what is in my head as well as this one. We are able to communicate, discuss alternatives, change things around and make it ours.  My originals have never sounded better, more honest.  It is just too damn much fun playing with these guys.
__________
What about the other band members.  What are their most passionate projects?
They better say this one!  lol.  Truly, they feel the same.  I know Dave sometimes misses his Irish stuff and will sometimes pull one out during a practice break, but he is my bass player and he loves it.
_____________ 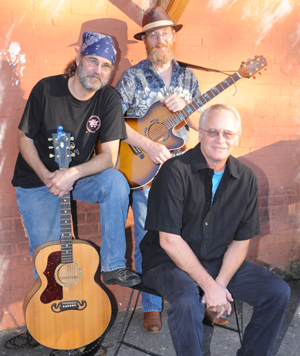 If you gentlemen did not form The Porch Authority, what would each of you be doing now instead?Gentleman?  We’ll take that compliment!   Honestly, we would probably be sitting at home being miserable.  I would be writing insanely depressing songs if I wrote at all.  Dave would probably have given up playing and Doug would be ruining meat on his smoker.__________________
The band does covers and originals.  Why both and not one or the other?  …why not do all originals? You have to look at the reality of performing.  People want to hear songs that they know.  It makes them comfortable and willing to listen.  Once you get a name and a following you can get away with all originals, but to get to that position, you must entertain and make the audience happy.  That is what you are getting paid for.  There are some venues that specialize in original music, but the vast majority want you to keep the audience upbeat and drinking.  If we do 3-4 covers that relaxes the audience and make them willing to listen and have fun, we can slip in an original or two without losing them.  Plus the fact that a gig can last 4+ hours, and we just don’t have that much original material at this point.  It takes a long time to take a poem and a riff and turn it into a full blown song, but we aren’t in a hurry.____________________
What do you do with your original music after it’s recorded?  Are you marketing it, selling it?  Can people buy it?
Right now, we don’t have a recording that is commercially available. We have a demo (recorded basically live in one 8 hour marathon session) that is just for promotional purposes.  Most of the money we made last year went into equipment upgrades for a better live sound and the goal for this year is to go back into the studio to produce something that is worthy of our audience’s money.  We have high standards for ourselves and studio time costs a lot when you have to do all of it yourself.  That and we really want a percussionist to join us to fill in those pesky little holes.
________________
How did you all meet and how was the decision made to form a band?We have a saying in the band.  It’s Tucker’s fault, Doug is to blame, Dave is responsible, but Joni started it!Dave’s ex, Joni, got a job with Opera Carolina where I was working as a stage hand and a mutual friend would have bonfires at a summer camp where he was caretaker.  We would sit around the fire and play guitars all night long with a host of other musicians.  We became friends and played together a couple of times then Dave suffered a severe injury to a finger and couldn’t play.  As a therapeutic idea, she suggested he pick up the bass again and got the two of us together.  That is kind of when I went from being a bass player to a guitar player.  The magic was there almost instantly.  He understood the rhythms and changes I had always heard but subtlety added his own interpretation and made them what they were meant to be. She met Doug through Nascar media and invited him over to my birthday party and we discovered that he used to play keyboards, so she loaned him her keyboard and then he introduced us all to Todd and we just started jamming.  I don’t know that there was ever a “decision” to form a band, it just happened and we have been been playing together for about 5 years now.________________
For the originals that you create, what’s your favorite topic, if you have one?Can’t say that I have a favorite topic.  It is just whatever is happening at that moment.  I have songs about love, hope, dreams, music, one about a poster I saw.  Some are happy, others are thoughtful, I just write about what has my attention at the moment._________________ 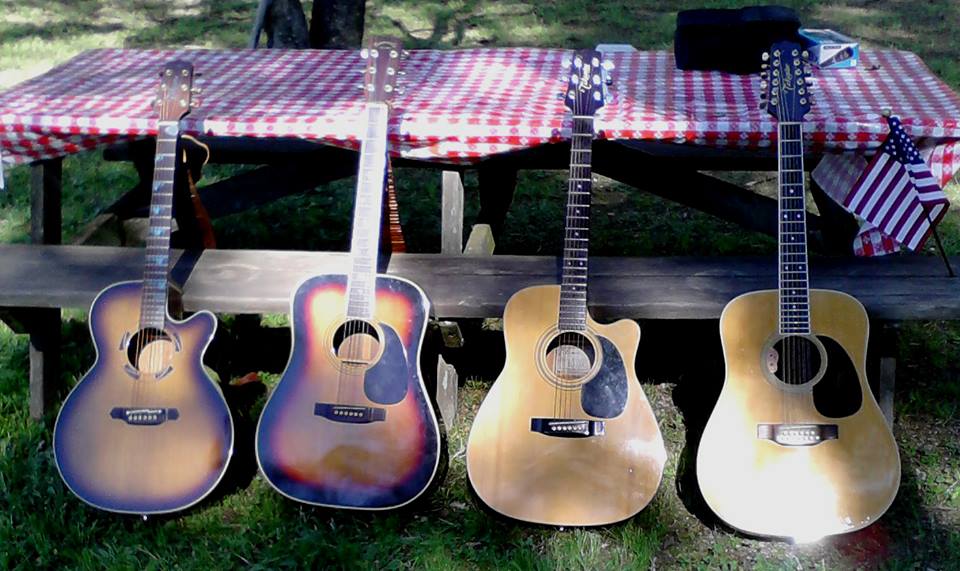 What’s your primary source of inspiration?Life.  Things happen and all of them have a story in them somewhere.  You meet a girl at a pub and out comes “Starlight. Starbright”.  You see a beautiful woman sad in the corner and you get “Hey Lady”.  A friend tells you about a dream and “Deb and I” explodes into your brain.  You jam with some friends and you get “Benson Town”.  It is all about being open and aware of what is going on around you.  ______________
Tell us about writing a song, teaching it to the band and how everyone falls in place musically.  Do things fall into place magically or is there work involved?  Tell us what that experience is like from your perspective and the perspective of the other guys.
When I write, I am usually just sitting, playing my guitar and letting my mind wander.  I hear a riff and find words to go with it or a fragment of a verse will wander through my head and I just go with it.  I just let it happen naturally.
Most of the originals we do I wrote a long time before I met the guys.  I remember sitting in Dave’s living room and picking out something from long ago and he just got it.  Totally changed the feel of it, but it made it better.  It is always a lot of work to get it right, though.  You have something in your mind and you present it to the band and they may not hear exactly what you do so you adjust, compromise, decide which riff goes where, move this break over there, accent this bit or that and every great once in a while come up with a cool ending.  Usually, I will just start playing and we see what happens.  Sometimes I have very specific things that I want and we work those out; other times it is just organic and we all write the arrangement together.  I had a song “The Big If” that was 75% finished but I was stuck on how to finish it.  A line was suggested that gave me the last verse and suddenly it was a complete song. 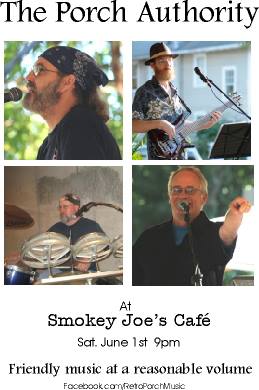 Dave brought a little ditty that he wrote while strolling along the lanes of a renaissance faire and taught it to us.  Doug has a couple that he wrote a while back and we just work and work until they are right.   It is all about listening and cooperating and keeping an eye on the goal of a quality piece of music.  It’s not about who’s song it is, it’s about making music together.  The fact that we can work it out is magic, but it still takes work.
As for Dave and Doug, we are all just happy to play together.  I know they love inventing something new, whether it  is an original song or a cover.  It has to sound like us.
_______________
What is the band’s goal?To get rich and famous, of course!  A gaggle of groupies, maybe a bus full of roadies to haul the equipment…. Seriously, though,  all we want is to be the best band we can be and make people happy, ourselves included.  We have all done “the show” and have no illusions about the glory and glamor of the road.  We play because we love it and it keeps us sane.  We just share the love and hope that we touch a few souls along the way. ___________
In closing, is there anything you’d like to add?Give us a minute..
Visit The Porch Authority’s links:
http://retroporchmusic.com/
Facebook
Reverbnation
SoundCloud