Greetings and well wishes!  This month I am featuring a very special talented person, none other than, Ramona from the great city of Little Rock, Arkansas via Pasadena, California. This young lady needs no special  introduction, her works speak for themselves. With no further ado, I give you, Ramona… !!!!!

BO: I gather you began your music career in church, Judging by the tone of your music it relates to me an early start rooted in Gospel music. I also noticed you have the ability or I should say God given talent to sing almost any genre’. I can hear Gospel , Soul, Jazz and blues whenever you begin to belt one of the songs on your repertoire.

R:    You must have an excellent ear for music to be able to tell I was reared deep into Gospel music at an early age. It’s true, the Creator gave me special talents to make up for my short comings. I have favorites among Gospel recording artist, Jazz musicians and blues. I can even belt out some Country. I refuse to call any names because I learned a long time ago, if you call names and omit someone, you’re in big trouble.

BO: Tell me how it felt rearing your family and traveling all over the world taking the music to every nook and cranny.

R. The hardest part was not being able to take part in seeing to it that they ( my kids) were bought up properly, unfortunately my responsibility was left upon the shoulders of my dear mother. I could not have made music my career if it wasn’t for the Creator and dear mother, whom I lost a year or so ago. Rest in Peace, mother. Many thanks to mother for nourishing my children while I was down the road of uncertainty.

BO: Please tell us what got you motivated to go for the music career.

R. I entered a talent show in a club in Los Angeles when I was 19 years young. I won the contest much to my surprise and $ 300.00. It was rocking after that win, but it has not been easy.

BO: Will you please tell the fans where we had our chance meeting?

R. I’ll be happy to tell the story of how we met. It was in 2006 in Helena, Arkansas at the King Biscuit Blues Battle ,* this was the name before it changed to Arkansas Heritage.

Bobbie and his band, Jam City Revue were competing against me and my band plus a whole bunch of bands from here there and every where. I do mean every where, Texas, Arkansas, Tennessee, Mexico and California to name a few. Okay, I met Bobbie’s wife, Eva in the Rest room after we had picked our numbers to be in the contest. She and I hit it off real well and began a friendship that has weathered a few years. We don’t see each other often but we keep in touch by telephone. Needless to say, my band did not win and Bobbie’s band did not win. It’s so hard fighting legions of road blocks made by man.

BO: Yes, I know just what you mean, I made one more trip in 2007 and decided I had enough.

R: I did not bother going back after the first fiasco. I must say better things happened after that, the next year, I opened for B. B. King in Little Rock, Arkansas at the Amphitheater. I invited my good friends, Bobbie & Eva with passes to the show. I even gave a shout out during the show to my friends. They have been a life line for me as far as friends go, they’re more like family. I have opened for Al Jareau and some other great musicians.

BO: How did you get to become a part of the Johnny Otis Band in California?

R: I had been booked at a club and his booking agents noticed me and gave me an audition date and two weeks later I accepted an eight year contract. We opened for B. B. King, Otis Clay, Buddy Guy, Grover Washington Jr. and numerous bands. 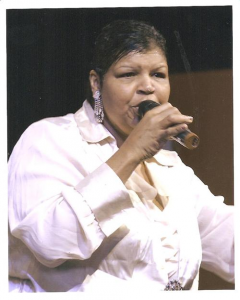 BO: I read somewhere where you had roles in musical productions, tell us about some of them.

R: I moved to Covina and was cast in “Dream girls” at the Covina Valley Playhouse, now known as the Covina Center for the Performing Arts.

BO: I am ready to hear that you have produced your own CD.

R: Hey man, that is at the top of my priority list, in the mean time you can hear me singing on “Good Loving Blues” with the Johnny Otis album sold at any popular music store.

BO: Thanks, my friend for allowing me into your zone.

R. You’re quite welcome, I hope the fans enjoy this as much as I enjoyed the interview.

Next month the editor will continue the story, What Was I Supposed to Be.

2 responses to “Ramona from Arkansas”