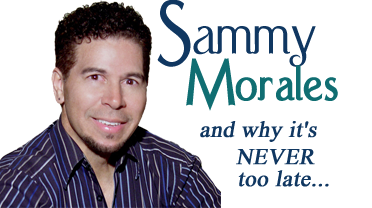 I found Sammy Morales on an indie artist site late in 2008.  I heard this entrancing, melodic voice and was moved.  He said the cd was in the works and would be done later in 2009; I patiently waited, then contacted him again and was pleased to find out it was done.  My teenager said his voice was “like magic.”  My 23-year-old said he really liked the feel of his voice and his music.

I am a fan, but I don’t write reviews, my goal is to provide a platform for inspirational artists to share.  When I was speaking to Sammy he told me he was in his early fifties.  He just put out his first cd and plans to do more.  That is inspiration!  So, for anyone who feels it’s too late and that life has passed you by, take note of what Sammy says: “I’m still breathing…”  So, if you’re still breathing, get to work.  The rest of us are waiting for you to share what you have with us.  It’s never too late.  Sammy thanks much for being actual proof that talent has no age limit and it’s never too late to pursue your dreams and express yourself!

You’re a multi-instrumentalist – you play congas, drums, piano and you sing.  What was your attraction to music and why did you choose to learn how to play different instruments?  What was your goal at the various stages?

My inspiration was The Beatles on Ed Sullivan in 1964 ~ I wanted to play drums above anything in the world. I really enjoyed listening to jazz on the radio and everything that came out of Motown. I liked Eddie Harris and explored Miles Davis, Odel Brown and the Organizers, that was a sound that I really dug!  I played drums and was inspired by Elvin Jones who I had the pleasure to meet! I did a stint on Tenor Saxophone. I played congas for years with a cool Cuban trio playing Cuban Classics. I studied piano, for orchestration. I studied voice.

One response to “Sammy Morales – It’s Never Too Late”