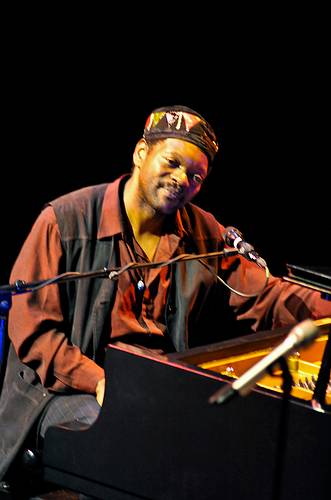 Byrd, has made many music travels all over the world and has a long list of sideman credits with such  well-known names as Eddie Henderson and Archie Shepp.  His thought is that jazz is a fine lens into the social dynamics of American life. In exploring the many facets of jazz music, you get many slices of what America is.
Warren Byrd is a Hartford native with an international touring schedule after many fruitful years playing Jazz throughout Connecticut, Southern New England, and New York.  Born in 1965 the youngest in a family of sixteen, he grew up in a musically fecund world. His experiences with performing began with singing in the church choir with his older siblings and lead to rich performing adventures in during his teen years, exposing him also to the vast treasures past and present of musical ideas.

By the time he’d been awarded a full scholarship for Classical Vocal Studies at Hartt College of Music, he’d decided he wanted to be a Jazz artist. Through the listening, absorbing, practicing, and synthesizing of legacies of not only Jazz, but also Classical, Folk, and Popular music past and present, he formulated his approach to improvisation and composition.

In the last, twenty years, he has lended his musicianship to many groups and performers in Jazz, R&B, World, Latin, Pop, etc., as well as Dance and Theatre. A short list of performers would include Archie Shepp, Eddie Henderson, Frank Lacy, Saskia Laroo, Steve Davis, David Chevan, Mixashawn, Kenny Hamber, Alvin Carter, Nita Zarif, and many more.

In 2000, he released Truth Raised Twice, his only album as a leader with many of his own compositions as well as standards from the Jazz repertoire.  The last several years include many international tours and two album releases with trumpeter Saskia Laroo; two duo albums, ensemble albums, and considerable press exposure with David Chevan and the Afro-Semitic Experience. He touts composition as the cornerstone of his development as an artist and the springboard of his career direction.