The Percussion Magic of Chi Sharpe

Chi Sharpe is a percussionist extraordinaire. He is a native of Winston-Salem, North Carolina, where he began his music career with his family band “Hell ‘n’ Highwater.”  The band, together 14 years, provided him with most of his early musical experience. His first formal lessons of Afro-Cuban music were in Portland, Oregon during 1976.  In 1979, he began to study West African music in Brooklyn, New York. Then on to Toronto, Canada, in 1979, Mr. Sharpe accompanied exercise and dance classes revolving around African drumming, as well as provided music for African dance troupes. The first dance company he performed with was composed of musicians from South Africa. In 1985, he continued his continental drum study journey in several countries in West Africa and has since returned several times to further develop his craft.

As a freelance musician, he has worked with various artists playing many styles of music in diverse venues ranging from small clubs, theaters and concert halls, to television, film and audio recordings. In the late 1980’s and into the 90’s, Mr.Sharpe played percussion on several world tours with accomplished musicians such as Harry Belafonte, Bruce Cockburn, Rodney Kendrick, Big Ron Hunter, Jose Neto, Otesha Creative Arts Ensemble Caren Calder(dance/folktales), Matilda Giampietro, Tariq Abubakar & The Afro Nubians. He also accompanied these musicians on various media recordings including CDs, film and television.

In 1995, he moved overseas to Amsterdam and worked extensively across Europe with several artists from Guinea, West Africa who were living in the Netherlands. Mr. Sharpe returned to the States in 1997, and continues to live, play and teach in New York City. 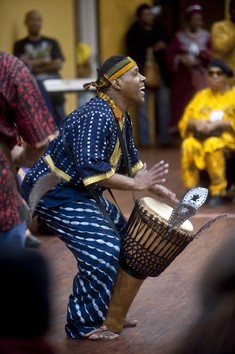 ISM:  We’re assuming that the African drum came first for you.  Did it, and how did you get started with drumming?

In hearing music piano came first. In playing music, saxophone came first in 4th to 6th grade in school. Piano in the 6th grade. 7th grade congas. My sister Brenda said to me “Hear that sound”? We were listening to some recorded music. “Can’t you play that”? I said, “Yeah! I got serious then with music. “right-on sis”!!!!!!!!!!

ISM:  Are you a full-time musician?

ISM:  Some people are afraid to take the leap to being full-time in music or other artistry because they are concerned about the inconsistency in pay and the lack of benefits – like health insurance.  Have these issues ever been a factor for you?

When I started full-time, inconsistency in pay was a concern, but health insurance never crossed my mind until recently. Living conditions is a concern. Retirement from music is inconceivable.

ISM:  Since you’re well established amongst musicians and the music industry, do the work and gigs come steadily, or do you find that sometimes you are looking for work?

ISM:  Do you enjoy the traveling and touring and being in other parts of the world, or would you rather work more from your home base in New York?

Traveling and touring I’ve done most of my life. I basically grew-up in night clubs.  Hotel rooms are second homes to me.  To travel, you must have guaranties.  Proper pay, accommodations and work conditions.

I don’t play all percussion instruments. The ones I play and like the most are the ones I purchased.

ISM:  Besides playing music gigs you also play for African dancers.  How does that differ from playing straight up music gigs?

To me, playing for African dance vs. the Bandstand gigs are subtle. The  difference basically is instrumentation – African Dance  (drums,balaphone,singing.).  Band gigs (piano,bass, drums,guitar,vocals etc….Listening is the key!!!

ISM:  What is your preference – the African drums or other percussion instruments?  Do you have one?

As far as my preference, it depends on the music.

ISM:  In a few sentences, describe who Chi Sharpe is.  Then tell us what makes you that.

I’m a musician.  My domain is percussion.  My purpose is to bring joy, excitement class, peace, comfort, respect.   My up-bringing and the way I carry myself.

ISM:  What’s next for you?  Is it always about music, or do you have other interests and passions?

I do have other interest and passions, but music must always be present.

Connect with Chi Sharpe on Linked In.