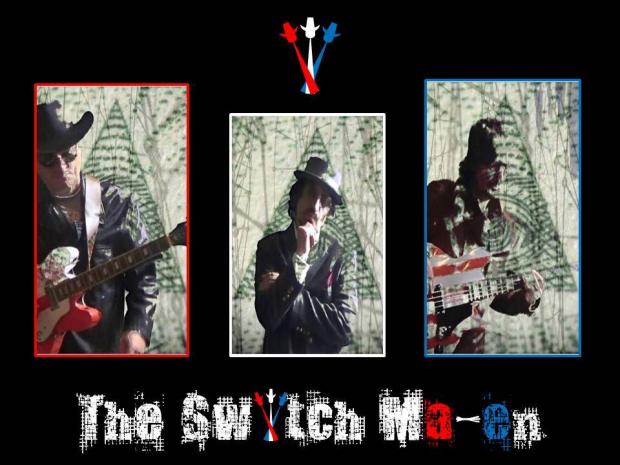 We found the answer to one of our questions on your ReverbNation page and we are reprinting it here:

What does The Switch Ma-en mean ?

The name The Switch Ma-en derives from many aspects. The first one from the Mexican absurdist writer Juan José Arreola who wrote the book El Guardagujas (The Switchman). Secondly from the life/writing style of the Portuguese writer Fernando Pessoa (The Disquiet of Being) who metamorphosed into different personas throughout his life in order to vary his writing style. A true method writer. Thirdly, what is the ‘Ma-en’ word all about ? Are we ma/n or are we m/en ? We can be anything we want to be and as Ghandi once said ‘Be the change in yourself’ and you might realise that the world you thought was bad actually starts to gets better. By using the basic quantum state we can figure out how to get out of the box instead of just procrastinating about it. The basic classical state is ‘you are either with us or against us ?’ A not B or B not A or the Hegelian Dialect (3 way triad of thesis, athesis and synthesis of devide and conquer) no longer works in our modern world. The basic quantum state allows two more states A & B (passion) and neither A or B (hope of an new alternative or genuine benign chance) that leads to evolution. The latter is the way out of the box to a new paradigm and from repeating the mistakes of the first two of perpetual conflict and constant revolution. For me this fits in with what the absurdist Albert Camus said ‘Rebellion, freedom, passion, and hope’ or what I term the 4 way tetrad of the Camus Dialectic. That fourth part ‘hope’ which is missing from the Hegelian triad gives life the take-off velocity to get off the tarmac, to go beyond the 3rd base and score a home run. In this respect that we operate on the basic of quantum operation and that is reflected in our philosphy and psychology married with the fact we have the ‘do it yourself’ ethos of the pre punk movent Fluxus from the 1960’s, there is an element of Quantum Punk’ about us. Cheers, Johnny de Guyse.

The band is based out of the UK – Bolton, North Manchester. Is everyone from there originally?

We are all from Bolton. Manchester.

How long have you been together and how did you guys meet?

Originally formed in 2013 but we have known each other personally since 1979 when we were the original UK punks.

How did the three of you decide to become a band and to stay a band?

We are both experienced musicians and are well read and polymaths. We both thought that the spirit of pop punk catered to the consumers and we wanted to evolve the original ethos of punk in the sixties (Fluxus) and the street punk of the seventies into a new hybrid, Quantum Punk, intelligence and common sense available to all and debated by all. George Benard Shaw once said ‘that youth is wasted on the young’ but I would counter that and say that ‘wisdom is wasted on the experience’ if we don’t pass it down to the future generation. I don’t accept the term the human race but prefer the term ‘The Human Relay’ and that wisdom and communication, etc is the baton.

Briefly what kind of projects have you guys been involved in before you formed The Switch Ma-en?

Troy is a qualified sound engineer and well recognized musician in the Manchester scene. Ya and Johnny have been involved in bands throughout Manchester and London all their lives in one capacity or another.

The Switch Ma-en has put out two songs thus far.  When do you think you’ll have the next one out?

Because we intend to put out videos with our tracks we are looking to release every six weeks. We have amassed at least 3 albums worth of material. Once we have 10 tracks together we will release a CD and DVD of the videos. That’s the model at the moment. Because we’re totally independent we can move at our own speed and output. The next track will be Persephone then followed by either Outside In, Mexican Clay, No Such Place As This or Me (The Disquiet of Being).

We are called The Switch Ma-en so we don’t want to fall into any genre. Some people will like some tracks but not all but we intend to get into the ‘feel’ of what we are writing about. Jaded Helm is a protest song so the theme of the sound (Alternative Outlaw Punk Country) and image was the ‘western spirit’. So each song will be themed both sonically and visually. Ironically the CD Album may be a neutral blank cover but with lots of imagery inside.

I am playing at throwing the cat into the rigid pigeon hole genre mentality so nobody could totally pin us down. But I’m not being pretentious either, we do everything ourselves (Neo Fluxus).  I’m empathic to the mindset of authors such as Camus (Post Absurdist); we are from Manchester UK (Industrial and Urban folk) and we are very interested in paradoxical thinking to resolve broken outdated patterns (Zen, Tao and quantum psychology).

We read some of the write up from The Bolton Evening News.  How was your band selected to be interviewed?

I just emailed them the link to the video and they were very interested in a story. We are a very new band on ReverbNation and we have gone from nowhere to first in our area in the Alternative Genre, 17 nationally, 173 globally in a space of two weeks with one video and two tracks. Few unsigned bands can make reasonable videos and that can hold them back. But it easy and cheap. We had no experience before making the video and made it in two weeks for under £200. Other musicians have asked the group to make videos for their tracks since. Normally producers remix tracks but we are being asked to put videos to their track so a mutual collaboration looks feasible. Such & such artist featuring The Switch Ma-en video etc. We are not just musicians but artists so that suits us fine.

Has the band played any gigs at this point?

Not yet. Its has all been about defining the group’s identity holistically and naturally. Where we are now has been a natural development over 2 years. We would need to recruit a drummer to play live but we are too busy at the moment finalising 10 tracks and videos. TSM are not just about music but an ideal so blogging and conversation with them is also important to us.

Tell us about the band’s ideal gig situation.

A collective all day event with other like minded musicians, artists, activists, food, etc. We don’t want it all to be be about us or our music, art, etc. – we are only part of the picture and the audience is just as important if not more so.

You gentlemen have an interesting perspective and seem to want to educate and enlighten.  What do you hope to accomplish as The Switch Ma-en and what’s the plan?

Where we are going in the world is pretty bad. I wrote a song when I was 15 and one of the lines was ‘don’t look at them, don’t look at me, look inside yourself for the answer’. It isn’t a new concept but we want to switch people on to themselves through alternative thinking and media. We need a new paradigm shift and that won’t happen until people see it is first possible in themselves first.