TIm Maynard – I Keep At It Every Day

Being a full-time musician sounds glamorous, but it really takes hard work and skills beyond the music.  Tim Maynard is full-time.  He teaches, composes, writes, markets and oh yeah – he plays the guitar.  But music puts him in the realm, “it’s when I feel most alive.”  A lot of us artists have that feeling when we are doing what we are.  Here’s Tim’s story — and after you read it, you might want to hit him up on skype and get those guitar lessons you’ve always wanted in real time or buy his training books.

What is music to you? How do you describe it?

It’s my livelihood when I sit and think about it. But when you’re in the moment, actually playing in performance, it’s when I feel most alive. It moves forward and nothing outside it matters. You never know where it might go and that’s exciting.

When did you decide to go to college for music? What prompted your commitment to music?

At the end of high school, there’s that push that adults put on you to go to college. I was in the ‘college prep’ program so that was the next logical step. The decision to study music came as a surprise as no one in the family knew anyone pursuing music as a profession. I had jobs like  newspaper routes and restaurant work to this point and got the idea that if I had the opportunity to pick my vocation I didn’t want to make the mistake of not going for it. Plenty of adults that I encountered would complain about their jobs and just be plain miserable. Here was my chance to go into something I loved to do and get high level training for it. If ‘luck is when preparation meets opportunity’, I would have at the very least some good training. In reality, I had no idea of what I was getting into.

You are a full-time musician. Is it easy to make ends meet?

On the one hand, I would say no. I’ve never been a stranger to hard work, which is not to say it’s something I’ve always enjoyed. But so long as I have say in the kind of hard work I’ll be doing, it doesn’t seem so tedious. It’s the thrill of the challenge to make it happen and ‘make ends meet’. It takes a much bigger skill set than any guidance counselor will tell you. You have to know more about how business works than you ever thought, graphic design, electronics, automotive repair, child development, writing, web design, marketing, and oh yeah, any genre of music the client may want you to teach them or play for them. The pursuit of knowledge and ability that began in college reaches a tipping point where you acquire enough to be paid for it. Gradually that rises to the point where you get enough calls for gigs and lessons and make ends meet, all the while  continuing on the path of knowledge acquisition.

Are there other ways that you support yourself besides performing and teaching guitar?

Years ago I need to make a little more and tried doing some retail work at a music store. But that took me too far away from teaching and playing. I had thought as a teenager that it would be so cool to work in a music store. You would get to play all the new instruments all the time and get really good. In reality, it’s nothing like that at all. If you need to make more, work harder at what you’re doing. Because what you thought was enough, is based on what? Your own perception? There’s no guide for this. But, no. It’s just teaching and playing.

Is there a specific style of music that you enjoy best? Why?

No. There’s something to appreciate in every style. If you just find that, it won’t matter what it is, you’ll be having a good time.

Is there an artist or musician who inspires you most and why?

That’s a hard one because there are so many in all the different genres. In terms of classical guitar, I really like David Russell. He’s just so solid technically and musically, and for me what I think I would like my music to be like.

Tell us about the New Primer educational program that you developed. Why did you create your own versus using other information that is out there? What does yours have that others don’t?

It started out as beginner method book to replace the method books that put out by the big publishers. Their approach was from a technical perspective rather than a music alone. Rather than trying to adapt to something less than ideal, why not create something closer to it? It was never anything I tried to bring to the publishers. Who picks a fight with

Goliath? My method catered to how I taught. Students enjoyed it and were successful with it. Now that Apple has developed the platform for self-publishing, I plan to work the method book into an iBook and offer multimedia add-ons. I’m sure Amazon offers something similar on their platform, so I hope to bring it there too. The goal is to get students who are self-motivated to a level where they can enter into private lessons already well developed. 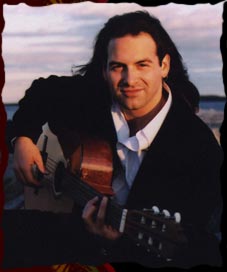 You recently composed music for a dramatic production that was performed in a theater. Though you’ve composed numerous guitar pieces throughout your musical life, is full musical composition something that you enjoy doing and plan to do more

Maybe. I certainly enjoy the creative process. When I immerse myself in that realm, it’s exciting to see what you’ll discover. But the demands of maintaining a studio and a performing career are always knocking on the door. I find those intriguing and challenging enough to dedicate my time to them. When the sustainability that I’m sure will come, I’ll find my way back to that place and delve into it again.

A lot of people, especially young people, pursue stardom. Did you ever seek to hit what people consider to be the “big time?” Why or why not?

Hell, yeah! Who didn’t want to be a rock star? But my thought process was: If you’re going to have the best chance at it, you have to know more, do more. Hence, the college route. But the more I got into it, my goals evolved and that ‘dream’ became something I desired less and less. And even all of these ‘behind the scenes’ shows are truth that the grass isn’t always greener.

As someone who’s been in a variety of performance situations – bands, solo, theater – what is your favorite mode of performance or playing? And if you have one, why do you prefer that?

I can’t say that I prefer any situation over the other as they have elements that are exclusive to themselves. In a band situation, there’s the power of volume and cohesion of a small ensemble. For theater, it’s about making that dramatic moment happen and working with actors as part of the ensemble. As a soloist, there’s freedom to interpret in the moment and personal expression. But each possesses the elements of live performance which is a thrill to be in. In the end, I am happy to be working and a wide palette like this increases the odds that I’ll have something going all the time.

You studio is gorgeous, roomy, comfortable and acoustically nice. How did Highland Guitar Studios come about?

Those are kind words and I appreciate that. The studio began in 2010 as my friend Gus Guastamachio let me space within his drum studio, Gus’s Drum Pad in East Hartford. We spent hours talking about students and teaching principles on our commute to gigs. As professional musicians/educators, we shared common ideas about what the ideal teaching environment might look like. When he purchased Dynamic Percussion in 2011, he moved to Manchester but kept me in mind when looking for a suitable space.

My studio is a 19‘x25’x9’ space. It’s undergone some renovations this past summer. I built and installed sound treatments to minimize the sound reflection in such a large space. But I’ve tried to provide the amenities of a music library (sheet music and audio recordings), equipment, recording capabilities and classroom space. I like to think of it as a boutique style of teaching space which doubles as my personal practice space/office.

What would you like to see happen in your life as music goes?

Like anybody else in this business, I’d be happy just to continue playing, and with that, writing and recording. There’s plenty of the classical guitar repertoire that I’d like to play and learn from. When I find the time, I’ll contribute my own 2¢ to it. With fertile ground of the internet, it would be nice to take advantage of the different possibilities there. My arrangements that I’ve made for solo guitar might find a way to be published/recorded.

I’d like to develop more teaching through that medium as well. The dream for the studio is to see if it can get busy enough to necessitate expansion. We’ll see, it might get hard to keep all of these balls in the air.

What are you doing to make that happen?

I just keep at it every day. That’s what it takes. When you hear “no,” you move on to the next thing.

Any closing words for aspiring guitar students who will hit you up on Skype for lessons?

Listen to everything and try to imagine how that sound or phrase was created. If you get stuck, send me an email and we’ll set something up.