Upcoming Performances at the Cutting Room in NYC 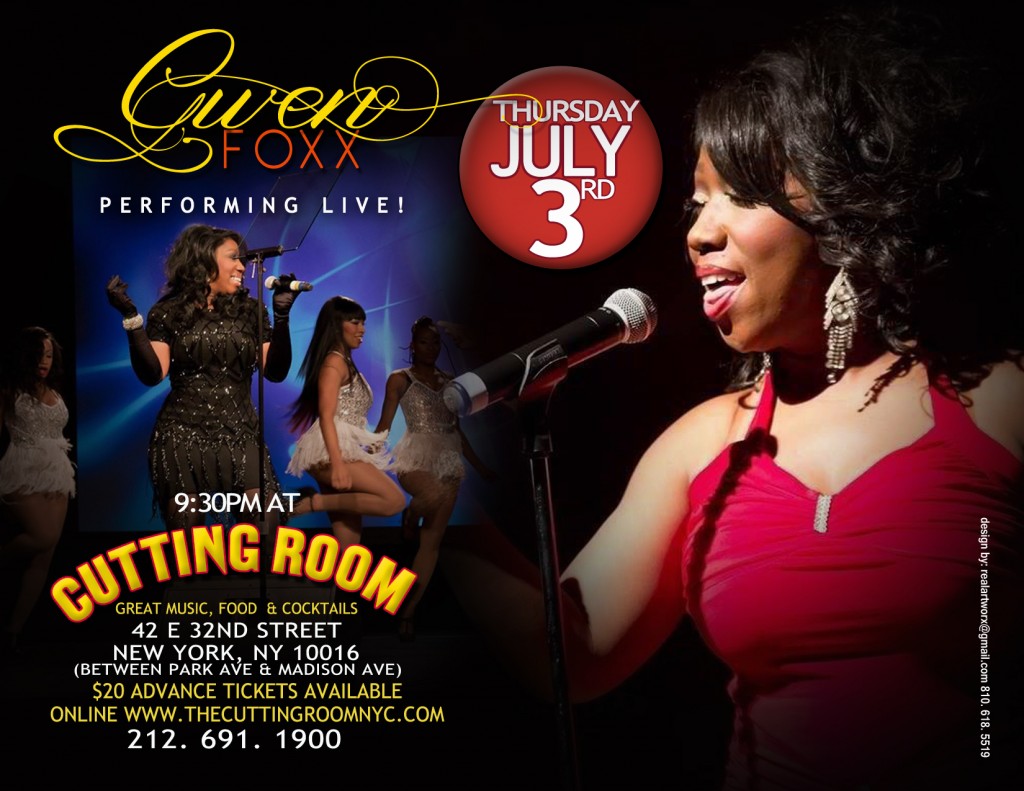 On July 3, 2014 at the Cutting Room NYC, Ms. Gwen Foxx will bring her live performance and Motown sounds to the stage at 9:30pm.

Gwen Foxx is an international music artist and one of the most renowned singers to ever come from Detroit. A mesmerizing performer and a unique song stylist, she can completely electrify an audience one moment and melt their hearts the next.

Gwen spans the musical spectrum from R&B to Jazz to Pop to Standards. Her vocal range is remarkable – from the sassy bassy sounds of Sarah Vaughan to the soaring soprano notes of Celine Dion. In-between she can be sultry, wispy, dramatic, and powerful. She can deliver it all. She is a rare talent.

Gwen has shared the stage with many of the Greats. She has performed with Chaka Kahn at The Blue Note Lounge, with Luther Vandross at the “Essence Music Festival”, with KEM at the CNN Conference Center, with T.D. Jakes at the “Gospel Mega Fest”, and with Aretha Franklin at her Annual Christmas Celebration.

She has been the opening act or featured artist at concerts with “The Motown Jazz Experience”, Will Downing, Brian McKnight, Bob Baldwin, Tom Brown, Marion Meadows, Gerald Albright. She was also the vocal director and background singer for Mary J. Blige’s “Share My World Tour”.

Gwen’s theatrical credits include: Langston Hughes’ “Black Nativity” with Stephanie Mills – produced by the Tony Award winner, George Faison; acting and singing with Jennifer Holiday and The Clark Sisters in Michael Mathew’s production of “Mama Don’t”; “Bent and Twisted” directed by Jackie Harry of the television hit “Sister to Sister”; David Payton’s “A Good Man is Hard To Find”; Angela Barrow-Dunlap’s “Why Do Good Girls Like Bad Boys?” and Barrow’s production of “Real Men Pray”; Lisa McCall’s “Broadway Detroit” and “Celebration of Detroit”; the hit gospel musical, “When God Shows Up” starring D’Atra Hicks and Yancyy produced by Denise and Rafael Foxx. That extensive theatrical experience is one of the reasons why she has so much stage presence when performing as a singer.

Gwen’s solo debut CD, “Quiet Storm”, represents a beautiful mix of velvety, jazzy R&B tinged with a little Hip-Hop flavor. The title track was written by Kern Brantley, music director and renowned bassist for “Lady Gaga”. Also featured is an indescribable rendition of Sade’s mega-hit, “Is It A Crime?”. Coming next is her new CD , “Sweet Talk”, produced by national recording artist, K’Jon.

Gwen Foxx is more than a singer and more than an actress. She is also very dedicated to her community of Detroit where she performs annually for the “Make A Wish Foundation”, the Karmanos Cancer Foundation, “Coats For Kids”, “Meals On Wheels”, and Gleaners Food Bank in conjunction with the “Jerry Ross Band”. She has made a profound impact on stage as well as in her grass roots give back efforts!

Over the years, the Motor City has produced a long line of talented artists and inspiring people. Gwen Foxx is definitely Motor City Magic!

You can view Gwen’s vocal performance at www.t-rose.com. 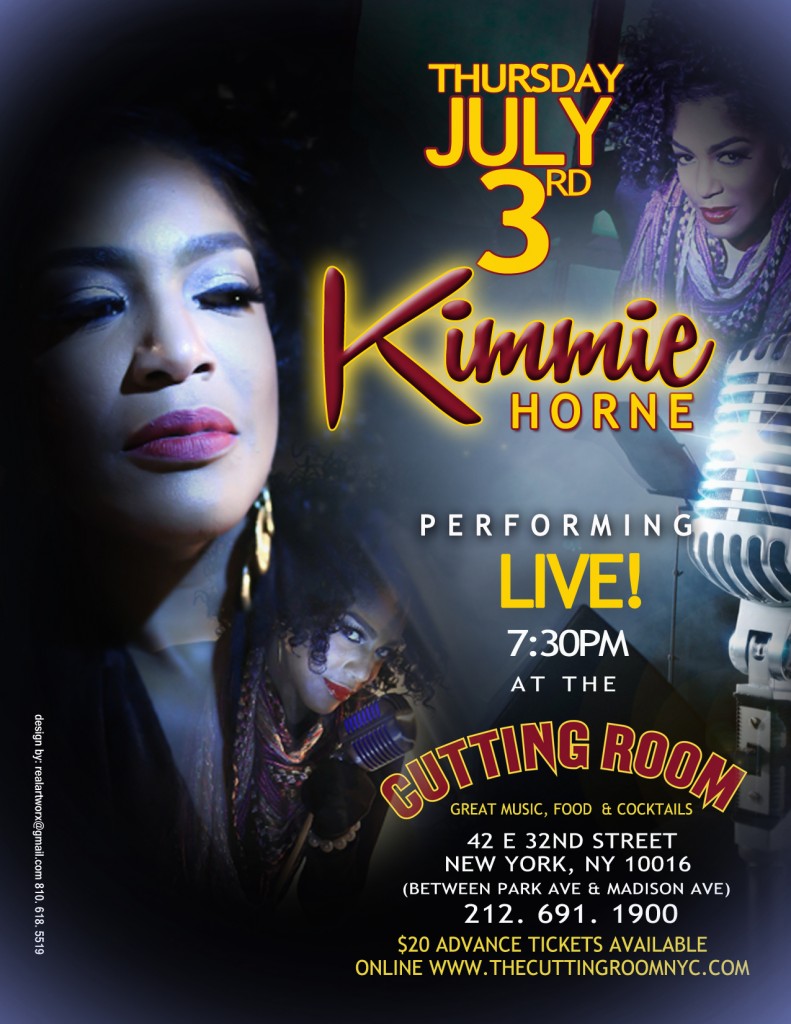 On July 3, 2014 Mr. Kimmie Horne will be performing at the Cutting Room NYC!  Ms. Horne is a descendant of the late legendary Ms. Lena Horne; and carries the torch quite well.

Ms. Horne also provides a tribute to great female vocalists that have help to pave the way for her.  Those legends include Phyllis Hymn, Sara Vaughn, Billy Holiday and of course Lena Horne.  Ms. Horne will place you in the midst of their vocal pleasure with the closing of your eyes and listening of the ear.  Her gift is presented from deep within… a must see performance.

Kimmie is an outstanding vocalist, enchanting performer and a creative arranger who has transformed non-traditional jazz songs into fresh new and respectable renditions. In each increasingly vibrant show, Horne leads her band with Class, Style and 25 years of  professional performance experience.

Endowed with a voice which summons great ladies of  Jazz, Kimmie has the lucid phrasing of Dinah Washington; the rich tones of Sarah Vaughn; the smoky sophistication of Phyllis Hyman and… A Descendant of the Legendary Movie Icon and Songstress…Lena Horne.

Her uncle was the late great singer and songwriter Cleveland Horne of  “The Fantastic Four”, The 1970’s- big hit “The Whole World is a Stage.

Throughout Kimmie’s musical career, her live performance in concerts, festivals, national anthems and casino’s around the world, have elevated her to headliner status at the Epicure Festival in Ontario and elegant supper clubs in Chicago, Las Vegas, Atlantic City, San Francisco, Toronto, Jamaica, London, Tokyo, Kyoto and Osaka.  She’s been a featured performer at top-name artist festivals such as the Legends of Jazz in Jamaica and shared the stage with talents as diverse as Ahmad Jamaal, Pieces of a Dream, Angela Bofil, Stanley Clarke, Keiko Matsui, Delfeayo Marsalis, The Neville Brothers, The O’Jays, Teddy Pendergrass, Chaka Khan, MC Hammer and  Isaac Hayes. She was awarded Best Female Jazz Artist for the 1st Annual Detroit Music Awards

This March and April 2014, Kimmie will celebrate her 20th Annual Japanese Cherry Blossom tour. She has generated a considerable following both at home(Detroit) and abroad.

Kimmie has established longevity with “The Kimmie Horne show” which includes her eight accomplished musicians and three background singers.  Horne leads her band through the trademarks of great vocal jazz phrasing and vocal improvisation.

Horne’s considerable talents are evident on her aptly titled ,“High Standards”, “Loving This Jazz” and “Live in Las Vegas” CD’s.  Her voice and arrangements have given a brand new swing to standards such as “Lullaby of Birdland,” “So Nice to Come Home To,” and “I Will Survive”.