Whenever there is political upheaval, educators and artists are usually targeted.  I remember speaking with an artist from Guatemala, who as a child was hidden by his family because the government was murdering all artists, educators and historians.  He recalls this vividly.  Hundreds of people were murdered, even some from his own village.  The goal was to destroy the people by destroying their knowledge of their history and to destroy their freedom of expression.  In these kinds of regimes artists are dangerous people.  Artists liberate people’s minds by infusing ideas and perceptions; we make them think.

With America and other countries’ constant deportation of people, we are denied.  We are denied culture and diversity.  We are denied understanding, art, expression, creativity and the impact all of it can have on our own existing culture.  These are things we must embrace.

We are sharing bios of two artists who happen to be of Mexican descent who have contributed to the American society.  Their contributions are art, inspiration, education and more.  We should not be denied the contributions of others because of political ideals.

Alfonso “Piloto” Nieves Ruiz is a self-taught artist from Queretaro, Mexico who moved to Chicago in 1997. He is a skilled sculptor who works primarily with clay and recycled materials to create dramatic, surreal pieces that deal with social issues. While Nieves draws upon his Mexican upbringing for many of his sculptures, the themes he explores are universal to all of humanity. Piloto is also an art teacher and has been sharing his knowledge with youth and adults through workshops in community centers, parks, and schools around Chicago and its suburbs since 2004. Most recently he exhibited his work in Cabeza de Barro, one of the most successful shows at the National Museum of Mexican Art. 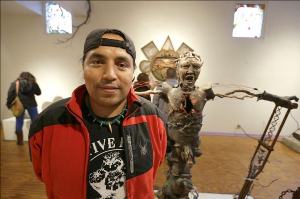 “The whole universe naturally exists in harmony and it is humans, through their destructive instincts of envy and ambition, who have upset the delicate balance of the universe. I use garbage and recycled materials in my work because they are waste products of human consumption. I took it upon myself to pick up this waste and fuse it with the earth in order to transform it into a lesson for humanity about our potential for creation or destruction. In addition to the material garbage, we have mental garbage that creates chains and vicious cycles that for generations have controlled human behavior. My art can seem dark, surreal, or decadent, but in the darkness there is light, in the surreal a reality, and in the decadent the ability to lift ourselves up and exist in harmony with nature and ourselves. In my opinion, we are all artists at birth because, being a creation ourselves, we have that as our essence. However, as life progresses we lose our inner artists because of criticism and fear that society gives us. For me, a true artist is the person who hasn’t lost memory and uses the emptiness as an opportunity for expression.” 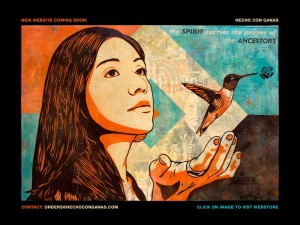 Ernesto Yerena Montejano is an artist living and working in Phoenix. He is the co-owner and curator of Hecho Con Ganas, a creative publishing company based in Los Angeles. Yerena has exhibited work nationally with Subliminal Projects, White Walls and Self Help Graphics and internationally with Galeria Estatal de Baja California. He has collaborated with Rage Against the Machine lead singer Zack De La Rocha, Manu Chao, photographer Aaron Huey and Philip Lumbang, and Shepard Fairey. He’s also been featured for both his art and activism in The Huffington Post, PBS NewsHour, BBC America, I Am Los Angeles, and Limited Hype Magazine. His is also the founder and curator of the Alto Arizona Art campaign (2010) as well as a founding member of the We Are Human campaign (2009).

According to Montejano, his work depicts his frustrations with the struggles of his community as well as defending their dignity and rights. In contrast to his contemporary themes, the artist pays homage to his culture by employing a vibrant color palette of orange, brown, yellow and turquoise, similar to colors used by the ancient Mexicas (Aztecs). He uses predominately uses spray paint for his pieces in which he experiments with textures and layering often sanding the surfaces to create weathered or distressed appearances.

(Top featured image from a protest in Arizona against SB1070, a child holds the poster of an image created by Ernesto Yerena Montejano. Creative Commons/Evan Finn)