This month I am featuring a husband and wife duo, Jawbone and Jolene, two of the nicest blues friends I have met in a long time. We became friends on Myspace before we met up at Juanita’s in Little Rock, Arkansas at the Thursday night Blues Jam, last month. Jawbone recognized me by my trademark, white beard when I entered Juanita’s.

Unfortunately I did not get to see their act because another dear friend carried us over to another venue for part of their Jam Session. We did return to Juanita’s in time to hear our favorite female blues lady, Essie The Blues Lady and Ruckus (her guitar) perform and our adopted daughter, Ramona Smith, all in all we had a fabulous time at Juanita’s. I have reviewed Jawbone and Jolene’s music and fell in love with that delta sound, I highly recommend this duo.

BO: Please tell us how you two met and how you got into the blues scene.

J&J: In 2003, we met through a mutual friend. Less than a year later, we married. Unbeknownst to Jawbone, Jolene had musical roots going back some 40 years. While he was between bands, Jolene carried a .22 rifle into a pawnshop and returned home with a Fender Concord guitar. She then asked Jawbone to teach her about the Blues. A few years later, they were ready to hit the stage. And they did just that in joints around Little Rock not to mention El Dorado and Jonesboro.
These days they can be found at the local farmers market in Little Rock busking for tips and spreading joy. All ages are attracted to our gritty honest real blues. We’ve seen little kids to octogenarians jazzing and jiving to our groove.

Between Jolene’s sweet and solid contra-soprano vocals and Jawbone’s whiskey voice, the bases are loaded. Jolene lays down a rhythmic groove for Jawbone’s harps to soar above.

BO: I am sure the readers are interested in how you two met and what influenced you to form a duo.

J&J: Jb-  For me (Jawbone), seeing someone close to me come awake with a guitar and a good voice, and take hold of that, and work at it, and bloom like a blossom, there’s nothing like that.  The day she brought her first guitar home she asked me to teach her about Blues music and I said, hey, I’m just a harp guy!  And she said, Just get me going in the right direction.  I’ll be your guitar gal!

BO: Will you tell us about some of the favorite places you have entertained?

J&J: We started out in a dive down in the Levy area of North Little Rock.  The owner was saying they’d lost their Tuesday evening happy hour act and I heard Jolene saying, “We’ll do it!”  And that was our first gig, a tip jar deal from like 6 to 8 p.m. at a dive down there on MacArthur Drive.  We also took an invite to go down to El Dorado and play at a jam there, and Jo totally won the crowd over down there one night.  We took on another happy hour thing at another place on MacArthur and also began playing on the street in downtown Little Rock.   The places were not as important as what Jolene began to realize, and that was that she had something to give to people, with her guitar and her voice.  She began getting on stage at open mic nights here and there and we also began busking and booking clubs in earnest.

We also hit the jams at a few places around town and have had some great times locally.  But once we “discovered” Clarksdale Mississippi, we had arrived in Blues Town!  One of our first trips over there we stopped for lunch at a joint that was in the old train depot, and the owner of the club ended up booking us.  An energy so strong you could feel it in there.  After all, this was the train depot in Clarksdale, at the crossroads of 49 and 61.  EVERYbody who was anybody had walked across that floor on their way to Memphis, Chicago, Detroit.  Muddy, Wolf, SBI and II, the Walters, Memphis Minnie, all the guys and gals who had laid the foundation of early blues so we could have something real to play.  And there we were on that stage, at sort of a personal crossroads, we could pack up and go home or we could take the roof off the place.

And that night I believe we each channeled some of that history and energy from that place and all those blues icons into our instruments and voices, and we just flat got it done.  Sometimes you just become a sort of conduit through which the real deal blues flows.  This was one of those times.  To say that we played with total abandon comes sort of close, but maybe you had to be there to really get the idea.  The owner was all smiles afterward and paid us double what he’d promised and asked us back.

BO: We want to know if you all have day jobs or do you play music as a career?

J&J: Jb- we have day jobs.  Or we’d be starving!  It’s hard out there.  Wages for musicians have actually dropped since I started playing in public in the 90’s.

BO: Tell us if you have entertained on Blues or music festivals.

J&J: Jb- We got to open for a car show/bbq contest in a small city an hour and change from here.  Did the Blues for Peace concert in Jonesboro with Hairy Larry and a crowd of bands.  We play at events in Clarksdale at a joint or two.  Recently we got to open for some really good friends from Hot Springs at their cd release party in North Little Rock. 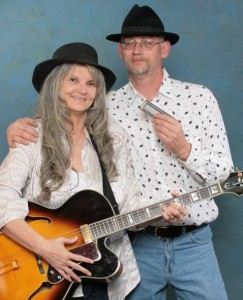 BO: How many CD’S do you have if any? If so are your lyrics original or do you do cover tunes?

J&J: Jb- we have one cd, and are working toward the second.  The first was a mix of covers and originals.  This next one will be largely or all original.  We both write songs and then we work them out in the living room and play them live.  The synergy that happens is really awesome.

BO: How many years have you been singing and picking? How long do you intend to be entertainers?

J&J: Jb- I’ve been playing music as an avocation for nearly 20 years now.  Jo is much newer at it but seems like an old hand fitting into a well broke in glove.  She’s a natural!  She has a unique feel for the groove and it’s an understatement to say that she’s been a perfect partner for me.  She has dug in and worked on nearly everything I’ve asked her to and made it work time and again.   Our plan is to play as long as the Lord lets us, and play every place we can until we get noticed or kicked out!  In fact we hope to just hit the road in a few years when we’re both retired, and tour all over, see the country, visit a lot of friends, and play across the nation.

BO: Did you all come from families with music backgrounds? Did you teach yourselves to play instruments of music?

J&J: Jb-  There was some music in my family but it was pretty much dormant.  My gramps played harp to me as a small child and that’s where it began for me, though it took years to show any results!  When I was a teenager my Mom handed me a box and told me to pick something out as a legacy from my long-passed father.  There was a Marine Band harp in there, key of C, which my Mom’s dad had given my Dad at about the time I was born.  This was what I chose as my legacy.  I had a cousin or two who dabbled in music but it’s not prominent in my family.  I still debate with myself whether I have any real talent, or if I’m just stubborn.  Having begun to try and play harp at age 17 or so, I was in my late 40’s before I really began to get the idea and expand my playing to emulate my harp heroes- guys like George “Harmonica” Smith, Jimmy Reed, James Cotton, and so many others.

For Jo, there was a family guitar and a couple members dabbled in popular-at-the-time songs.  When she was about 10 years old, she adopted that guitar for a summer and taught herself how to play out of a Joan Baez songbook and some piano chord books.  Then she took a few decades off, until the passion was awakened after she and I became a couple.  She is very partial to the styles of Memphis Minnie and we cover a few of that great lady’s songs. Jo always sang ever since she can remember. Sang some in a church choir and doing household chores on a daily basis.

J&J: Jb- Muddy and all his crews, Wolf, Jimmy Reed, Little Walter, Joe Turner, Tbone Walker, Memphis Minnie, Etta James.  There are so many!  What I love about blues in general and those mentioned above in specific is, you hear them and you are moved.  You feel them.  They all played the music with an earnest dedication that we do our best to emulate because we feel it too.

BO: Have you won any awards? If so name a few for us.

I thank you for allowing me to enter your lives with so many questions and I sincerely wish you guys the best of everything in all your endeavor, keep making music.