We found Jonny on twitter.  We recognized that he was young, and we also saw that he was answering a lot of questions that other people had about guitars and playing the guitar.  We enjoyed his excitement when he announced the launch of his his very first guitar training video.  We admire the fact that he was learning something new and he wanted to help others to learn.  That’s what it’s all about – sharing, teaching and uplifting others.  Jonny’s off to a good start. 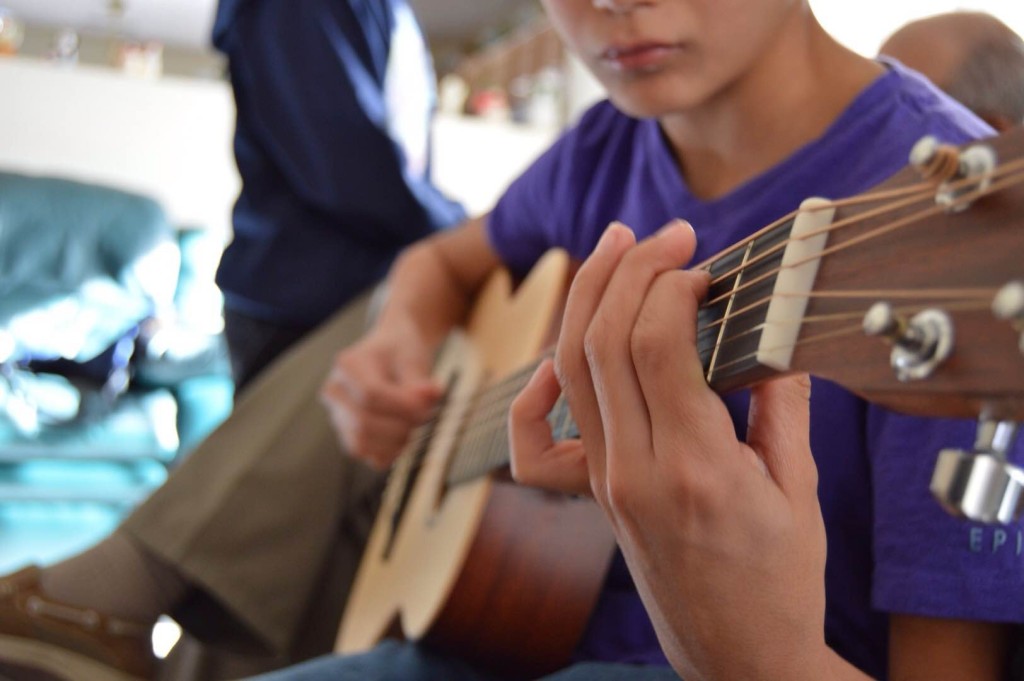 “Guitar Lessons 4U’s goal is to help beginners who are struggling with practicing and having fun. We believe by learning certain songs with chord progressions and other techniques, allows beginners guitar players to practice in a fun way.”

How old are you?

How long have you been playing guitar?

I have been playing guitar a little bit less than a year.

Do you also read music?

I do not know how to read music but I am in the process of learning. I figured since I am not playing classical guitar that I could wait a little bit.

Who taught you how to play?

I learned to play guitar with books that my dad owns and using videos on youtube. That is what inspired me to make my own youtube channel.

If one looks at your twitter feed, a lot of people have been asking for your advice and suggestions on learning how to play the guitar.  How did they know to ask you?

Only a few people have asked me questions personally. I reply to questions that are asked on other threads from other guitar accounts, and eventually they start asking me for help themselves. I figured I could help people out who might not get noticed by the more popular accounts.

In your youtube video, you say this is “our first” lesson.  Who else is involved in the lessons that you are posting and what is their involvement?

My older brother, Josh is involved in helping me make the videos. He is a photographer who also knows a decent amount about videography. He also helps me to prepare for the videos by giving me a general script of the video to follow along with, and directing during filming.

Do you play any other instruments?

I also play the Ukulele. The Ukulele  is something fun to mess around with because its like a mini version of a guitar, and very easy to learn once you get a general knowledge of the guitar.

I started playing the guitar because of multiple reasons. I bought a miniature flying V from a pawn shop when I was younger because, Josh was playing a lot of guitar at the time and I wanted to learn too. Unfortunately at that point I didn’t actually begin to play anything. Fast forward to this previous year, and I began to pick it up a little more. My dad used to play a lot as well as my brother and even my sister so the guitar has always been in my family which I would say has been a paramount thing in inspiring me to learn, and help others learn.

Have you set up a video lesson posting schedule?  When can your fans expect your next lesson to be posted?

I have not posted a video schedule yet because I am going to make a couple more videos to have a couple on youtube before I start a schedule, but as of right now, I am hoping to get at least two videos up per week.

Do you teach students from your home or at school?

I teach students from my home.

What made you decide to start teaching on the internet?

I decided to start teaching on the internet because that’s partly how a learned how to play guitar and wanted to help teach beginner guitar players with songs and technique that helped me progress very quickly.

Do you also write your own songs, or just focus on learning covers right now?

I have only written one song because I am mostly focusing on making guitar tutorials right now, but in the future, writing my own music is definitely a possibility.

Often when people start learning and playing music, they say that their lives have been enhanced in some way.  What do you feel music has done for you?

Listening to music gives me joy and makes me calm, but when I play it just feels incredible, a feeling that can’t be matched by anything else this world can offer – that’s why I like playing guitar so much.

What do you plan to do musically and where to you hope it takes you in your life, or have you thought that far ahead yet?

I have not thought about my future with guitar, but right now I am going to stick with having fun with it.
LINKS
Guitar Lesson Lola by the Kinks beginner version
Beginner Guitar Lesson, Zombie by the Cranberries